The term woodboring beetle (Wood Borers) encompasses many species and families of beetles whose larval or adult forms eat and destroy wood (i.e., are xylophagous). Larval stages of some are commonly known as woodworms. Wood-boring beetle larvae feed on wood and wood products; adults emerge from larval feeding chambers through round, oblong, or D-shaped exit holes. Adults of some species also bore holes into plaster, plastic, and soft metals.

Depending on the species, wood-boring beetles can feed upon certain hardwoods or softwoods. Some hardwoods are naturally immune, if they have low starch content, or if the pore (vessel) diameters are too small for the female beetle’s ovipositor which prevents her from inserting eggs into the substrate.

Items that can be infested by wood-boring beetles include any wooden tools or tool handles, frames, furniture, gun stocks, books, toys, bamboo, flooring, and structural timbers.

The adults are very small, less than 1/4″ in size. They are flattened and reddish-brown to black in color. Larvae are white, cream colored, shaped with dark brown heads. Larvae create tunnels in the wood and become pupae. As adults they bore out through the wood, pushing a fine powdery dust out. The shape of their holes are round ,about 1/32-1/16 pinholes.

The term “powderpost” comes from the fact that the larvae of these beetles feed on wood and, given enough time, can reduce it to a mass of fine powder. They are therefore considered pests. The family Anobiidae is the only one capable of digesting cellulose, the primary ingredient of wood, and all other species excrete the wood without digesting it.

Powderpost beetles spend months or years inside the wood in the larval stage. Their presence is only apparent when they emerge from the wood as adults, leaving pin hole openings, often called “shot holes” behind and piles of powdery frass below. Shot holes normally range in diameter from 1/32 inch, (0.8 mm) to 1/8 inch (3 mm), depending on the species of beetle. If wood conditions are right, female beetles may lay their eggs and reinfest the wood, continuing the cycle for generations. Heavily-infested wood becomes riddled with holes and rooms or basements packed with a dusty frass  wood that has passed through the digestive tract of the beetles. The larvae feed mainly upon starch in the wood. 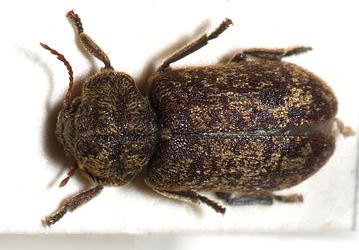 The death watch beetle (Anobiidae) is a woodboring beetle, namely a beetle whose larvae are xylophagous. The adult is approximately 7 mm long. The larva can be up to 11 mm long.

Deathwatch beetles are closely related to the drugstore and cigarette beetles, which are stored-product pests. Adults communicate with each other and probably locate mates by tapping their heads against wood, usually at night. (Deathwatch beetles supposedly acquired their name during medieval European times from people who heard the tapping while sitting up with a sick or dying person during the night.) Adults are reddish to dark brown and lay eggs in crevices or small openings or pores in unfinished wood. Two years may be required to complete each generation.

Deathwatch beetles are found primarily in soft woods, including girders, beams, foundation timbers, and some types of furniture. Some species attack books. This beetle is typically found in old wood and may be associated with wood that is partially decayed. Deathwatch beetles prefer wood that is more moist (greater than 14% moisture) than what powderpost beetles prefer and may be less of a problem in houses with central heating and air conditioning. Larvae of deathwatch beetles fill their galleries with small pellets of frass (smaller than the pellets produced by drywood termites), which distinguish them from other wood borers. None of the other boring beetles produce pelletized frass. 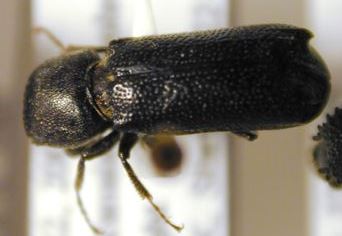 Adults are dark brown or black, sometimes with reddish mouthparts, legs, and antennae. Adults of most species are about 1/4 inch long, but in some species, adults reach 1-1/2 to 2 inches in length. Adult beetles have a humpback appearance, so their head is not visible when viewed from above. This characteristic is also seen in deathwatch beetles.

Females bore a tunnel, or egg gallery, into wood or other materials, then deposit their eggs in pores or cracks within the tunnel. Adults of some species bore through soft metal, such as lead and silver, as well as plaster and other nonwood materials, searching for sites to deposit eggs or for protection from weather extremes. This gives rise to the common name “leadcable borer” given to one species because of its habit of boring into the metal covering of suspended telephone wires. In buildings, false powderpost beetles infest floors, furniture, hardwood paneling, and other wood materials. 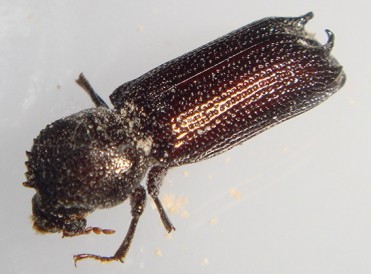 Oriental wood borer (Heterobostrychus aequalis). This genus is about 6-13mm long in length and is reddish-brown to brownish-black in color. The head is not visible from above, as it is recessed beneath the pronotum. The anterior half of the pronotum has broad, toothlike marginal tubercles. The elytra have several rows of deep pits, and toward the rear the wing covers curive inward creating a concave area that in the males is equipped with two stout spines.

The larva is white to yellowish, with a characteristic bostrichid shape, variable in size with most last instars averaging 10 mm. The mandibles are black, conical and the darkest area on the larva. All stages are found in dry lumber which is eaten by the adults and larvae. The eggs are deposited on rough surfaces of sawed lumber and logs, in holes, cracks or short tunnels made by the female. The larval borings may be 1/4 inch wide, winding for several inches. The tunnels are usually filled with tightly packed, fine, sawdust-like material which is characteristic of this genus. Tunnels of most pinhole and shothole borers contain very little such material. Pupation occurs in a cell at the end of the tunnel. The adult emerges through an exit hole, often after chewing through a few inches of wood. Length of development from egg to adult is variable from one to several years (up to six years recorded). Apparently they can survive under dry conditions present in manufactured wood products and emerge several years later, as do some of the Cerambycidae.

Its habit of boring in packing cases, boxes, plywood, furniture and lumber make it a serious pest. In heavy infestations the wood is often reduced to powder to a depth of 2 to 3 inches. It is a threat to nearly all wood products, and has even been recorded as boring into the lead linings of boxes. In hardwoods, the damage is usually confined to the sapwood, but may extend deeper in soft woods.

Wood-boring beetles are difficult to control once an infestation has begun. Prevention is the best management method. Protective measures should be taken at every stage of lumber processing and handling including lumber mills, plywood mills, lumber yards, furniture manufacturing factories, and building construction firms.

Sanitation is the most important aspect of prevention. Remove and destroy dead tree limbs around buildings or near any area where wood products are stored. Destroy scrap lumber and other wood products before they become infested. Kiln drying of lumber destroys beetle infestations, although it does not prevent re-infestation.

Materials used for construction of buildings and wood furniture should be thoroughly inspected before use to be certain that they do not contain wood-boring beetles. Apply liquid insecticides as primary materials for application to structural wood for preventing and remediating infestations of wood-boring beetles.

Protect wood from infestation by painting or varnishing to seal pores, cracks, and holes where eggs could be laid. Most beetle problems are introduced into homes in lumber or finished wood products (i.e., furniture, paneling, or flooring). Most serious infestations occur when infested wood is installed in the house. Inspect wood to insure that wood is not infested at the time of home construction.

Powderpost beetles only lay eggs on bare, unfinished wood. Beetles will not infest wood that is painted, varnished, waxed, or similarly sealed. Beetles emerging from painted or varnished wood were either in the wood before finishing or were a result of reinfestation by eggs that were laid in emergence holes of adult beetles. Sealing holes prevents reinfestation from eggs laid within the hole.

Infested wood can be replaced if the infestation appears to be localized. For instance, if emergence holes appear in a member of a door or window frame, the piece can be removed and replaced with a new, uninfested wood.

Where removal is not possible, use liquid insecticides containing materials such as Cypermethrin 24% EC that are labeled for the control of these pests. Apply the insecticide only to infested areas, but be sure these are thoroughly soaked.

In keeping our words “Reducing any unnecessary use of toxic chemical to further reduce the impact to the rest of environment”. We adopt Insecticide-Direct-Injection by using a syringe and inject liquid insecticide into the holes one by one. The method can ensure the infested wood is thoroughly soaked and at the same time, avoid over use of insecticide.

Insecticides are labeled for surface treatment of bare, exposed wood. Spraying or brushing insecticides onto infested wood creates a barrier that kills adult beetles as they chew their way out of wood. The barrier also kills newly-hatched larvae as they attempt to bore into wood. For the surface treatments to work properly, they must penetrate the wood. Therefore, the wood should be unfinished or sanded to remove the finish. In certain situations, the surface treatment can penetrate the wood sufficiently to kill larvae within the wood to prevent the further marring of the surface by additional emergence holes of adults.

Fumigation is considered the most effective method of controlling wood-boring beetles. This method is very common especially for exporting lumber or wood packaging materials under the requirements of IPPC & ISPM 15. However, fumigation method of control does not provide residual protection of the wood. An ideal treatment method should involve fumigation, surface treatment by insecticide and, finally painting.
Toggle Sliding Bar Area