Stored Food Beetles are usually brought into the home in an infested package of food. Initially, infestations are difficult to detect because the insects involved are quite small, especially in the egg and larval stages.

The most common insects infesting food in your home are in the insect orders Coleoptera (beetles). Beetle larvae are either grublike and legless or have only three pairs of legs, all located close to the head. Both larvae and adults of beetles feed on foodstuffs.

The use of insecticides is discouraged around food materials. Insecticides are supplementary to sanitation and proper storage.

The simplest and most effective measure is to locate the source of infestation and quickly get rid of it. Dispose of heavily infested foods in wrapped, heavy plastic bags or in sealed containers for garbage removal, or bury deep in the soil. If you detect an infestation early, disposal alone may solve the problem.

In case of large population of stored food beetles are found at food storage warehouse, we may need to use smoke generator to perform smoke fumigation.

Purchase grains in small quantities for early use, and store in containers of insect-proof glass, heavy plastic, or metal with screw-type, airtight lids. For longer storage, refrigerate or deep freeze. Properly ventilate the storage area to discourage these moisture-loving stored product pests. Be sure to store only clean, dry grain with a moisture content of 12 percent or less to reduce weevil problems.

Stored food beetles are positive phototaxis, which means that they can be attracted by UV lights, and be trapped by insect glue pad traps.

At the Johnson Group GreenSTORE, you can acquire easily all effective, environmentally safe and non-toxic products. Free delivery to single location with purchase of HK$500 or above (Not including Discovery Bay and outlying islands, forbidden and remote area). 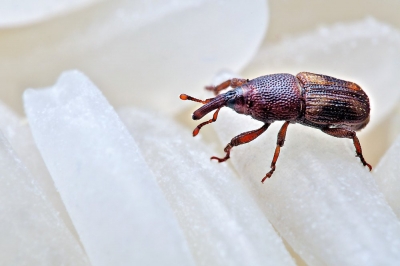 Both granary and rice weevils, often known as “snout weevils,” penetrate and feed on the internal portions of whole grains during the larval (immature) stage, making early detection of infestations difficult. They are usually found in grain storage facilities or processing plants, infesting wheat, oats, rye, barley, rice, and corn. Although not often found in the home, sometimes they infest table beans, acorns, chestnuts, birdseed, sunflower seeds, and ornamental corn. They are rarely found in macaroni and spaghetti. Homeowners sometimes refer to infested foods as “weevilly.” Granary and rice weevils do not bite or sting humans or pets, spread disease, or feed on or damage the house or furniture.

The red flour beetle is a tenebrionid beetle. It is a worldwide stored product pest. Red flour beetles attack stored grain products (flour, cereals, pasta, biscuits, beans, nuts, etc.) causing loss and damage. They may cause an allergic response but are not known to spread disease and cause no damage to structures or furniture. The red flour beetle is of Indo-Australian origin and less able to survive outdoors than the closely related species Tribolium confusum. It has, as a consequence, a more southern distribution, though both species are worldwide in heated premises. The adults are long-lived and may live for more than three years.

The confused flour beetle (Tribolium confusum), a type of darkling beetle known as a flour beetle, is a common pest insect known for attacking and infesting stored flour and grain. They are one of the most common and most destructive insect pests for grain and other food products stored in silos, warehouses, grocery stores, and the home.

Sawtoothed Grain Beetle (Oryzaephilus surinamensis) attacks cereals, dried fruits & flour etc. This beetle is small and about 2-3mm in length and brown in color. The margins of the thorax are saw-like, bearing six projections on each side, and this is reason for its common name.

Hide Beetle (Dermestes maculatus) is large beetle that is attracted to dreid or cured meats with high protein content. Adult beetles are about 6-13mm in length, dark gray to black in color with whitish hairs on the edges of the thorax.

Cowpea weevil (Callosobruchus maculatus) are small beetles, 3-5mm in length, reddish in color, and the body narrows evenly toward the small head. This genus will attack dried beans and can be a serious pest in stored beans. Adults move about readily and can infest seeds in the field, but can also breed continuously in stored dry cowpeas. Larvae typically develop inside the dried peas.