There is no better defense against termites than a tailor-made treatment plan from Johnson Group. Successful termite management requires many special skills, including a working knowledge of building construction. An understanding of termite biology and identification can help a homeowner detect problems and understand methods of control. In most cases it is advisable to hire a professional pest control company to carry out the inspection and control program.

Upon receiving reports of termites, Johnson Group’s specialists will first conduct a on-site inspection. Then our team will carry out the termite control measures in the 1st, 2nd and 8th month* after the inspection. If the problem re-occurred during the 12-month warranty period (counting from the 1st service), any additional services would be free of charge.

For clients who are undergoing renovation/construction procedures, who seeks prevention measures against termite, Johnson Group will exclusively handle all the wooden material by spraying the termiticide for free. So that you would not have to worry about potential threat from termites when moving in.

*The actual termite control schedule and procedure might differ according to the infection situation, constructions, and environment. Feel free to contact us for more detail. The common termite species can be found in Hong Kong and Taiwan is called Formosan subterranean termite (Coptotermes formosanus). The other two common genus within subterranean termite family (Rhinotermitidae) are Reticulitermes and Heterotermes. The group as a whole is so-named because their activities are usually associated to some extent with the soil.

Subterranean termites invade your premises mainly by two methods. The first one will be termite swarm during early spring, a swarmer is a reproductive individual within the colony. Other names for reproductive individuals are the terms queen and king. Swarmers emerge from the ground or soil and mate in flight. They then drop their wings. Males die after mating. When mated females find suitable habitats (with moisture and wood), they are then ready to begin laying eggs and forming a new colony.

The second method is that, subterranean termites access aboveground wood in buildings through protected cracks and cavities. Normally, termites live in colonies underground, from which they build tunnels in search of food, they are able to reach food above the ground level by building mud tubes (mud shelter), as long as they can find tiny cracks or wood, they may start invading your home.

Like other insects, termites have six legs and a body divided into three main parts i.e. Head, Thorax and Abdomen. A pair of straight antennae is situated on the head. People always confuse termites with ants because of their somewhat similar appearance. The simple ways to distinguish termites from ants is that, termites have straight bead-like antennae and an abdomen that is broadly joined at the thorax; Ants in contrast, have elbowed antennae and a petiole (waist), which is constricted. Winged ants have differently-sized fore and hind wings while termites have same-sized fore and hind wings.

Termites colonies contain distinct types of castes (individuals) that differ in both form and function i.e. Reproductives, workers and soldiers.

This is hard to quantify the size and foraging range of termites. A large colony contained about 1 – 7 million foragers and could travel distance up to 100 m. A small colony contained only 55,000 individuals and occupied foraging areas less than 20 meter square.

Termites can consume a wide assortment of cellulose foods including living and dead wood, roots, grass, paper, cardboard, fiberboard and other plant-based materials.

The rate and extent of structural damage depends on many factors and conditions like food types, moisture content and also the amount of competing food sources, it is extremely hard to predict with confidence how long an infestation has been present. However, some studies show a large colony could consume 0.5 – 1 kg of wood each day.

Termites belong to the insect order Isoptera, an ancient insect group that dates back more than 100 million years. The Latin name Isoptera means “equal wing”and refers to the fact that the front set of wings on a reproductive termite is similar in size and shape to the hind set. In nature they make many positive contributions to the world’s ecosystems. Their greatest contribution is the role they play in recycling wood and plant material. It is however, termites become a problem when they consume structural lumber.

Most termite species swarm in late summer or fall, although spring swarms are not uncommon for subterranean and drywood termites. New kings and queens are winged during their early adult life but lose their wings after dispersing from their original colony.

An infestation begins when a mated pair finds a suitable nesting site near or in wood and constructs a small chamber, which they enter and seal. Soon afterward, the female begins egg laying, and both the king and queen feed the young on predigested food until they are able to feed themselves. Most species of termites have microscopic, one-celled animals called protozoa within their intestines that help in converting wood (cellulose) into food for the colony.

Once workers and nymphs are produced, the king and queen are fed by the workers and cease feeding on wood. Termites go through incomplete metamorphosis with egg, nymph, and adult stages. Nymphs resemble adults but are smaller and are the most numerous stage in the colony. They also groom and feed one another and other colony members.

Subterranean Termites
There are more than 2,500 different types of termites in the world. However, most of this diversity can be lumped into four distinct groups: dampwood termites, drywood termites, subterranean termites, and mound builders.

Subterranean termites require moist environments. To satisfy this need, they usually nest in or near the soil and maintain some connection with the soil through tunnels in wood or through shelter tubes they construct. These shelter tubes are made of soil with bits of wood or even plasterboard (drywall).

Controlling Subterranean Termites
Subterranean and dampwood termites in structures cannot be adequately controlled by fumigation, heat treatment, freezing, or termite electrocution devices because the reproductives and nymphs are concentrated in nests near or below ground level in structures out of reach of these control methods. The primary methods of controlling these termites are the application of termiticides or baiting programs.

Use of termiticides or baits should be supplemented with the destruction of their access points or nests. To facilitate control of subterranean termites, destroy their shelter tubes whenever possible to interrupt access to wooden substructures and to open colonies to attack from natural enemies such as ants.

Dampwood Termites
Dampwood termites only infest wood with high moisture content. Dampwood termites nest in wood buried in the ground, although contact with the ground is not necessary when infested wood is high in moisture. Because of their high moisture requirements, dampwood termites most often are found in cool, humid areas like flowerbeds and are typical pests of beach houses. Infestations in structures usually occur where wood is wetted by moisture leaks. Structures, utility poles, pilings, and lumber exposed to high moist soil and humidity are subject to attack. 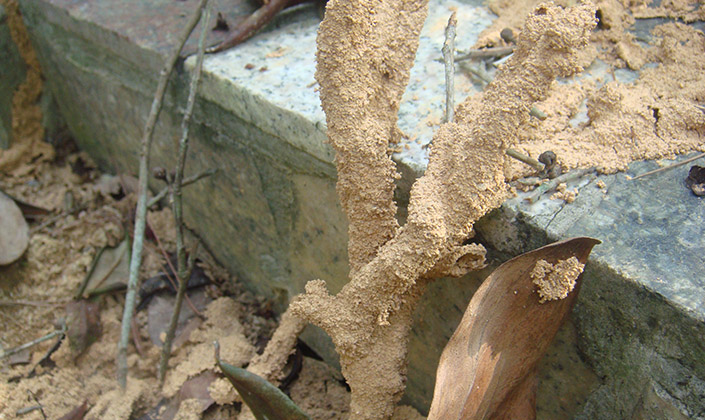 Drywood Termites
Drywood termites are so-named because they live entirely in dry, sound wood. They are well adapted to withstand environmental extremes in both moisture and temperature. Drywood termites colonies are small in comparison to subterranean termties, containing perhaps a few thousands individuals. Drywood termites infest dry, undecayed wood, including structural lumber as well as dead limbs of native trees and shade and orchard trees, utility poles, posts, and lumber in storage. From these areas, winged reproductives seasonally migrate to nearby buildings and other structures usually on sunny days during fall months.

Drywood termites have a low moisture requirement and can tolerate dry conditions for prolonged periods. They remain entirely above ground and do not connect their nests to the soil. Piles of their fecal pellets, which are distinctive in appearance, may be a clue to their presence. The fecal pellets are elongate (about 3/100 inch long) with rounded ends and have six flattened or roundly depressed surfaces separated by six longitudinal ridges.

Infrared thermography is the easiest and quickest method to detect heat and moisture in structures or buildings. An infrared camera shows exactly where the problems are and helps focus termite professionals’ attention allowing them to properly diagnose areas with termite activity.

Thermographic Termite Inspection – Infrared thermography is the easiest and quickest method to detect heat and moisture in structures or buildings. An infrared camera shows exactly where the problems are and helps focus termite professionals’ attention allowing them to properly diagnose areas with termite activity.

The Termatrac® T3i has revolutionized the practice of professional termite detection by combining the three critical technologies required to competently and efficiently detect, locate and confirm the presence of termites:

The 3-in-1 functionality makes the Termatrac® T3i become one of the best available tools for our Professionals.

Termite risk areas are easily identified using the Remote Thermal Sensor with Laser Guide and/or the built in Moisture Sensor. Termatrac’s patented Termite Detection Radar is then used to accurately detect, confirm and track the presence of termites, plus precisely locate nests, mud-leads, and entry points to ensure a cost-efficient and effective treatment. 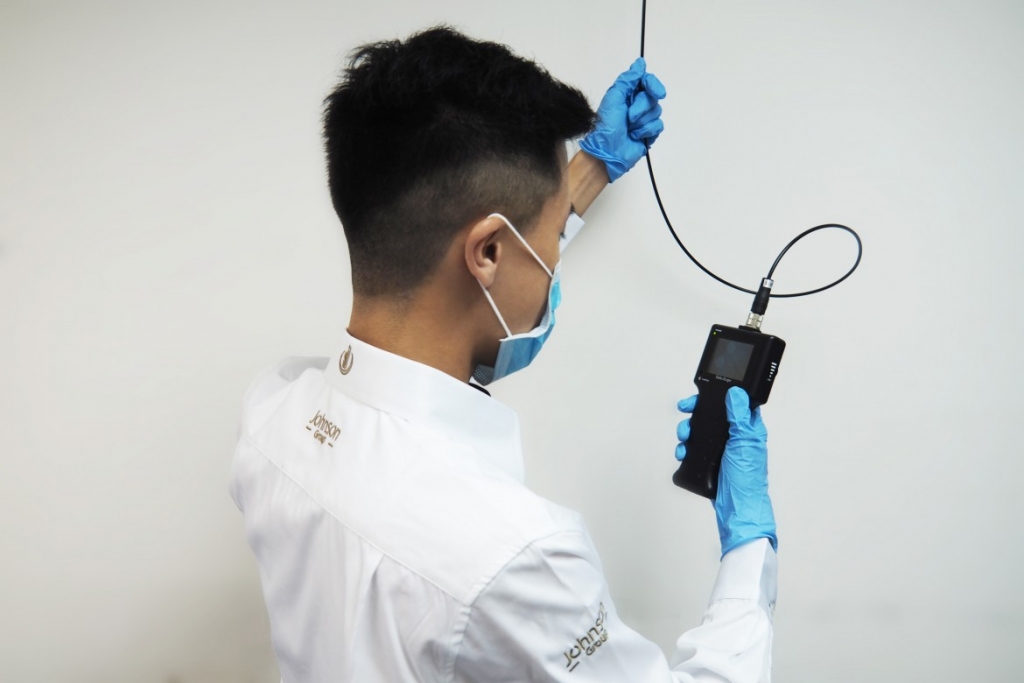 Nothing can be comparable with visual evidence. It can sometimes prove invaluable in situation where conventional inspection methods are inadequate. SafePRO® Borescope can be used to inspect hollow trees/roots and inaccessible areas i.e. false ceilings, voids behind walls etc. where traditionally could not be uncovered by the use of microwave or CO2 type detectors.

SafePRO® Borescope enables our technicians to see into areas that are otherwise inaccessible for visual inspection. The palm-sized video borescope is equipped with an LED light source, TFT display, camera and recorder, it can let you see through what is actually moving underneath the mud shelters and behind finished walls. Typically, a hole (~5mm) is drilled and the optical lens is inserted into the desired viewing areas. 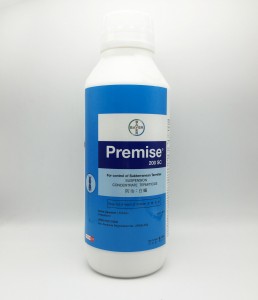 Premise is a non-repellent termiticide, that provides economical structural protection combined with a colony management effect. Premise is a sustainable solution for termite control. It is water-based and has been designed to provide protection at extremely low doses, utilizing an active ingredient with a good safety and environmental profile.

Killing – Premise® allows termites to enter the treatment zone, but after a short distance they are affected by the chemical and control is achieved immediately. They become disoriented and dysfunctional, stop feeding and are no longer able to coordinate their tunneling through the soil.

Prevention – Premise® continues to move slowly in the soil for several days after application, ensuring more even distribution. This will create a continuous barrier with no breaks and weak spots.

There’s proof to back it up Bayer compiled research from 2003 – 2006 in over 3,000 structures in 22 states: Over 40 PMPs and 23 University Researchers participated in the study All termite species were represented Showed Premise provided greater than 98% control of termites. 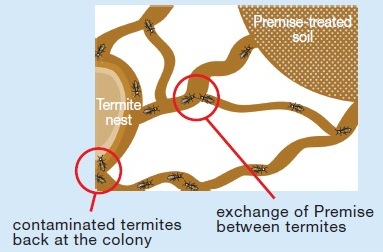 Premise works by killing termites, and because contaminated termites transfer it to other termites before they die, it kills not only those entering the treated soil, but also many of the termites back in the colony. This colony management effect greatly increases the success of termite control, as termites are eliminated, not just where the soil is treated, but also back their source – the termite colony. All public estates and parks