Wasps are dangerous, and they are good at survival. Successful wasp control requires many special skills, including a working knowledge of building construction. An understanding of wasp biology and identification can help a homeowner detect problems and understand methods of control. As wasps are aggressive territory defenders, you should stay away from their nest if you ever found one. To avoid being approach by wasps, the most effective way is to avoid exposing your food and sweetened drinks. Once they successfully set up their nest, clearing their nest could be very risky which requires professional help.

Wasps are much more dangerous than honey bees

As wasps have a strong territorial awareness and aggression, they will gang up and attack once they are disturbed. Their stings are reusable unlike bees, which also contains toxin that could cause allergic reactions or more severe threats to our health, including potential of death. Comparing to honey bees, wasps can deal much more damage to us, therefore please seek professional help when you encounter their nests.

Yellowjacket or yellow-jacket is the common name in North America for predatory wasps of the genera Vespula and Dolichovespula. Members of these genera are known simply as “wasps” in other English-speaking countries. Most of these are black-and-yellow, some are black-and-white (such as the bald-faced hornet, Dolichovespula maculata), while others may have the abdomen background color red instead of black. Wasps are carnivorous that they consume insects such as caterpillar and worm. But they also consume nectar and sap.

They develop with complete metamorphosis: egg, larva, pupa and adult. The adult wasps are of three forms: male, female and worker. The males and females are reproductive with the females (or queens) founding the nests and laying eggs. The workers are sterile females. Each female and worker wasp is armed with a sting used for defense against predators. However the male is unarmed.

Wasps may live solitary in ground holes, clay pots, or bamboo stem cavities. Species that cause nuisance, however, are social insects and live in papery nests hanging from trees or building surfaces. The most commonly found species are: (a) Vespa bicolor (b) Vespa affinis (c) Polistes olivaceous. They may fly 2-3 km to search for food. Large aggregation of wasps is usually caused by food attraction.

Nests of both yellow-jacket and paper wasps typically begin to build in spring by a single queen who overwinters and becomes active when the weather warms. She emerges in late winter/early spring to feed and start a new nest. From spring to midsummer nests are in the growth phase, and the larvae require large amounts of protein.

Workers forage mainly for protein at this time (usually in the form of other insects) and for some sugars. By late summer, however, the colonies grow more slowly or cease growth and require large amounts of sugar to maintain the queen and workers. Normally, yellow-jacket and paper wasp colonies only live one season. However, some yellow-jacket colonies survive for several years and become quite large.

Scavenging wasps will not usually become a problem if there is no food around to attract them. When nuisance wasps are present in the outdoor environment, keep foods (including pet food) and drinks covered or inside the house and keep garbage in tightly sealed garbage cans.

Once food is discovered by wasps, they will continue to hunt around that location long after the source has been removed.

Most social wasps provide an extremely beneficial service by eliminating large numbers of other pest insects through predation and should be protected and encouraged to nest in areas of little human or animal activity.

The best way to prevent unpleasant encounters with social wasps is to avoid them. Wasps can become very defensive when their nest is disturbed. Be on the lookout for nests when outdoors. Wasps that are flying directly in and out of a single location are probably flying to and from their nest. To stick with the belief of avoiding using chemical insecticide to reduce environmental pollutions. If the circumstance permits, our pest control specialist will make these DIY traps for you

The baited trap (Yellow-jacket Trap) are made from 2-litre bottles. Split it into two, reverse the top and place it into the bottom. And then make a mixture of sweetened juice/soft drinks with sugar and soap water. This can effectively reduce the number of wasps.

If the number of wasps is too high, or the wasps are too close to human habitat. We will use cold fogger to spray insecticide so as to exterminate the wasps, and then we can deal with their nest.

Difference Between Honey Bees and Wasps 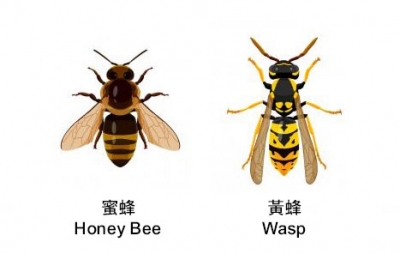 Wasps belong to insect order Hymenoptera which is also shared by bees. However they look and live totally different.

Quite different from bees, which only sting once, wasps are stinging insects that are able to withdraw their stings for use again and again. A wasp has ‘wasp-waist’ caused by a deep constriction between the thorax and abdomen. Bees on the other hand are more round shaped, with the waist not being very obvious to spot. Wasp have two pairs of membranous wings and have yellow and black markings on their bodies. While bees have yellow hair on their body, with stripes in deeper colors.

There is also a big difference between the the wasp nests and bee hives. Most of the honeycombs of the beehives are vertically suspended and not exposed to the outside. There are only one or two exits from their hives, if the honeycombs are exposed, the bees will cover them with their own bodies. Most of the hives are presented in layers, covering each other. The comb of the wasp nest, one the other hand, “blooms” like a flower towards the outside. The bees use their own lipid beeswax to build the hive, however the wasps chew the wood cellulose mixed with their saliva, turning it into a paper-like substance to build the nest. Therefore , the wasps nest has a texture like cardboard.

One Graph to Learn All Difference Between Wasps and Honey Bees

Found Bees Instead of Wasps? Contact the Save Local Bees Team！

Johnson Group Professional Pest Control has been serving Hong Kong since 1947, with a great reputation of adopting non-toxic and eco-friendly methods.

Honey bees is the guardian of the eco system by maintaining the balance and playing the vital role of pollinators, which are essential for our food source. However, from our experience, we could see that the living space for honey bees in Hong Kong has been severely threatened. The decline in beekeeping businesses, and general misconception on honey bees from the public are discouraging. Therefore, Johnson Group launched the Save Local Bees conservation program from 2018, trying to lead by example, saving the bees instead of exterminating.

If you found honey bees or bee hives, please contact us immediately! Let us relocate the colony of bees to the rural areas. And Johnson Group will buy back the honey produce by the bees you saved!