Hong Kong is in a subtropical region, which means that mosquito problem has always been common. Conventional pest control service using chemical pesticide, larvae oil etc. is not sustainable due to the harm to the environment. Johnson Group professionals will come up with a tailor-made mosquito control plan according to your needs, prioritizing non-toxic mosquito control products. Effective in dealing with mosquito problem, and much safer by avoiding harmful chemical residues!

AMF is a polydimethylsiloxane-based (PDMS, silicone) formulation. It adds a thin silicone film on water bodies and constitutes a physical barrier to the reproductive capabilities of mosquitoes.

The low surface tension of the film prevents larvae from breathing as well as depositing their eggs on the water surface, drowning many of them in the attempt.

Silicone film is resilient to strong wind and wave action on open water, will spread quickly and completely around aquatic vegetation. And the film will not build up on the downwind side of a water body. It is resistant to ultraviolet degradation and remains effective for around 30 days. Johnson Group provides clients a collection of electric insect mosquito killer for both indoor or outdoor usage. The vast variety of the appearances makes it easy to blend the devices into your environment, suitable for industrial, commercial and household use!

Insect killers use UV black tubes to attract mosquitoes and other phototactic insects. Replace the glue traps routinely to keep clean, no noise, no odor, no pollution, no chemicals. We also provide electronic shock insect killers.

Utilizing clean solar energy, Solar Trap™ has been equipped with the optical sensor system. It will automatically charge on day time, and activate while night time. When comparing the overall running costs of Solar Trap™ with other two LPG models for the first years, Solar Trap™ could save up to 60% of costs.

No chemicals involved in the process and great safety features. Solar Trap™ is composed with safety design fan, unlike other existing products, it doesn’t have any danger from electrical shock, electrical short or fire. It is safe to place the device anywhere like schools, parks and playgrounds etc. SafePRO® multiply rapidly feeding off the same substances which the larvae need to consume. It constrains the natural development of the mosquito larvae by starving it due to the enzymatic action on the larvae’s food, while producing more nutrients for your plants. 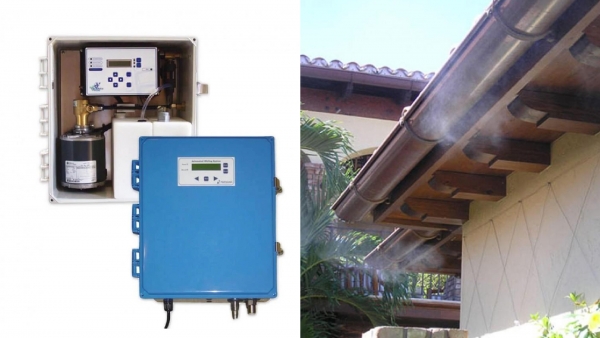 Computerized and automated misting system which provides an effective insect mist barrier along the perimeter (up to 500ft) of protected areas with immediate results.

Refill the SmellGREEN® Natural Insect Repellent routinely, and the system device will spray the repellent according to the programmed settings, creating a ‘mosquito-free’ zone.

If the circumstances is too severe and the non-chemical means mentioned above are not enough, we also provides chemical control methods.

Cold fogging is a space treatment against flying adult. Though It cannot reach air spaces in areas obstructed by dense vegetation or other objects, it is easily to control its distance and coverage, and is more suitable to apply in urban areas. When the flies come into contact with the droplets (usually in 5-30 micron), they will be killed immediately.

Larvae oil is a petroleum distillate, when applies directly to water bodies, it will form a thin film on the water surface and kill larvae and pupae by suffocation. But the process requires extra care as it should never be applied onto water sources for human consumption. The bacterium Bacillus thuringiensis subsp. israelensis (Bti) infects and kills mosquito larvae. It must be consumed by the larvae and acts as a stomach poison, damaging mid-gut cells of mosquito larvae. It is highly selective, killing only mosquitoes and larvae of a few other related flies.

Female mosquitoes of nearly all species require blood from vertebrate animals to develop eggs, and many species bite people, pets, and livestock for this purpose. The most important consequence of this is the transmission of microorganisms that cause diseases.

Dengue fever is an acute mosquito-borne infection caused by the dengue viruses. This is found in tropical and sub-tropical regions around the world. For instance, dengue fever is an endemic illness in many countries in South East Asia. The principal type of mosquito that transmits the disease is called Aedes. The dengue viruses encompass four different serotypes, each of which can lead to dengue fever and dengue hemorrhagic fever.

Malaria is a serious and sometimes fatal disease caused by a group of malaria parasites, namely Plasmodium vivax, Plasmodium falciparum, Plasmodium ovale, and Plasmodium malariae. The principal type of mosquito that transmits the disease is called Anopheles. It is commonly found in many parts of tropical and sub-tropical areas where the climate is warm, like Africa, South-East Asia and South America.

Characteristics of Mosquitoes (Including Midges)

Mosquito adults are small, flying, midgelike insects. Female mosquitoes can be differentiated from similar insects by the presence of a long slender proboscis that is adapted for piercing skin and sucking blood, and long slender wings that are covered with small scales.

In the immature stages, called larvae or wigglers, mosquitoes are usually black or dark brown and occur in nonmoving or nearly still water. Most mosquito larvae have a distinctive siphon or air tube at the rear of their bodies. The next stage is the pupal stage; pupae, called tumblers, are also aquatic and are small, roundish forms, usually black in color.

Up to the present, we have found 70 kinds of mosquitoes in Hong Kong. The most common kinds are Aedes Albopictus, Anopheles Minimus, Anopheles Jeyporiensis, Culex Pipiens Quinquefasciatus, Aedes Togoi and Culex Tritaeniorhynchus.