What is Mold (or mould)?

Molds are fungi that grow in the form of multicellular filaments called hyphae. A moldy appearance of objects i.e. commodities, goods etc. is caused by a layer of fungal growth.

An effective way to prevent the growth of mould requires different control points within the supply chain i.e. starts with raw materials, production, packaging, storage and shipping of finished products.

Moldy appearance found in exporting goods is actually caused by two major factors, the presence of fungi and moisture. In other words, if we can limit the density of fungi and control the humidity level in different control points, we can inhibit mold growing on the commodities and goods.

The Professionals of Johnson Group are pleased to offer Factory Inspection to analyse the possible cause of mould. They’re also able to prepare different anti-mould & bacteria treatments to fit your requirements and needs.

Johnson Group adopt a container as sterilization chamber, and then gas-in Ethylene Oxide (ETO) to kill bacteria, fungi and mould. We use TIF-XP-1A &XP-3120 as the detecting & monitoring devices and conform strictly the requirements of clients and importing countries. 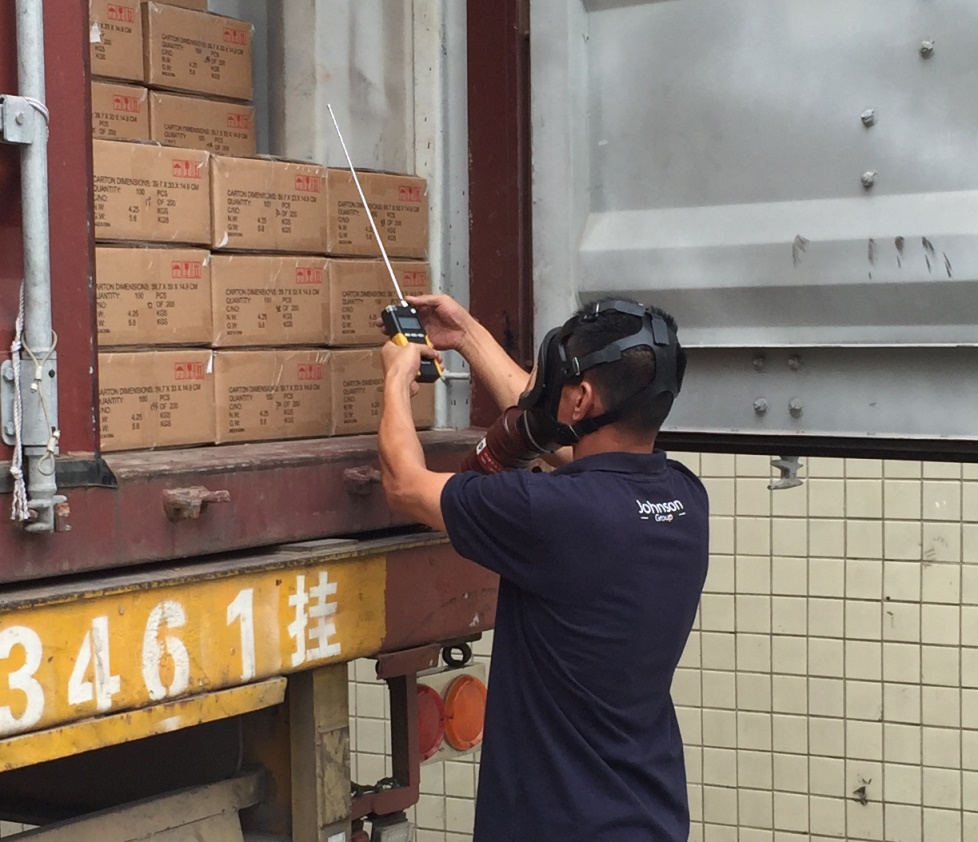 Ethylene Oxide as a sterilizer – ETO plays a critical role in antimicrobial sterilization to protect public health. ETO uses include sterilizing certain heat-sensitive and irradiation-sensitive materials, as well as some instruments and devices on-site in hospitals.

Ethylene Oxide is a gas fumigation – diffusion process. It started off as an insecticide in the 1920’s and became widely used as a fumigant for agricultural produce. Because of the chemical’s very low boiling point (10.4° C), it becomes highly active at room temperature. It vaporizes and permeates rapidly through packaging substances like plastic, rubber etc..

Under normal atmospheric conditions ETO is deadly to all types of micro-organisms. Fumigation time varies from 24-72 hours depends on types of commodities, moisture level, concentration etc. Degas (Air wash) is required to eliminate any gas residue (0 ppm) according to the requirement of ISO10993-7.

ETO as a sterilizer to prevent the growth of moldy appearance

ETO plays a critical role in antimicrobial sterilization to protect public health. ETO uses include sterilizing certain heat-sensitive and irradiation-sensitive materials, as well as some instruments and devices on-site in hospitals.

Ethylene Oxide is well placed to deal with a wide range of products. For example, plastics which may not physically cope with other types of processing are well suited to Ethylene Oxide. Being an extremely small gas, ETO will penetrate most forms of packaging. Powders, timber and other solids are easily treatable as the gas will flow around irregular surfaces.

Will ETO treatments damage my products?

Johnson Group takes as much care as possible to ensure no damage occurs to your items. In all cases, where possible, we strongly suggest you run samples of your product and perform any necessary testing to ensure the technology we use does not affect the quality of your product.

How do I determine the appropriate dosage of ETO?

Johnson Group takes as much care as possible to ensure the Performance in killing bacteria. In all cases, where possible, we strongly suggest you run samples of your product and perform any necessary testing to ensure the Microbial Testing Result is up to your requirements.

Will ETO residues trapped in the products?

After 24 hours of fumigation time, degas (Air wash) is required to eliminate any gas residue (0 ppm) according to the requirement of ISO10993-7. Ethylene Oxide rapidly breaks down when released to the environment. It will dissolve in water, but most of it will quickly evaporate to the air. The ethylene oxide remaining will be broken down by bacteria, or by reacting with water and other chemicals.

When released to soil, most will evaporate to air and some may be broken down by bacteria or by reacting with water in the soil. Ethylene oxide does not persist long in the environment and is not expected to build up in the food chain.

The ETO mixtures are used for a wide spectrum of applications including sterilization of medical equipment, treatment of foodstuffs, raw material for cosmetics and preservation of paper products.

ETO treatment can achieve the microbial test result in next page if both dosage and procedures are compiled & followed strictly.

**Performed only if coliform is present

We comply with all the rules and regulations as per the local laws in usage of the fumigants. We also follow strictly the dosages requirements set out by local authority. For safety reason, the residue reading should be 0 ppm before the goods can be returned back to you.
Book Now
Toggle Sliding Bar Area